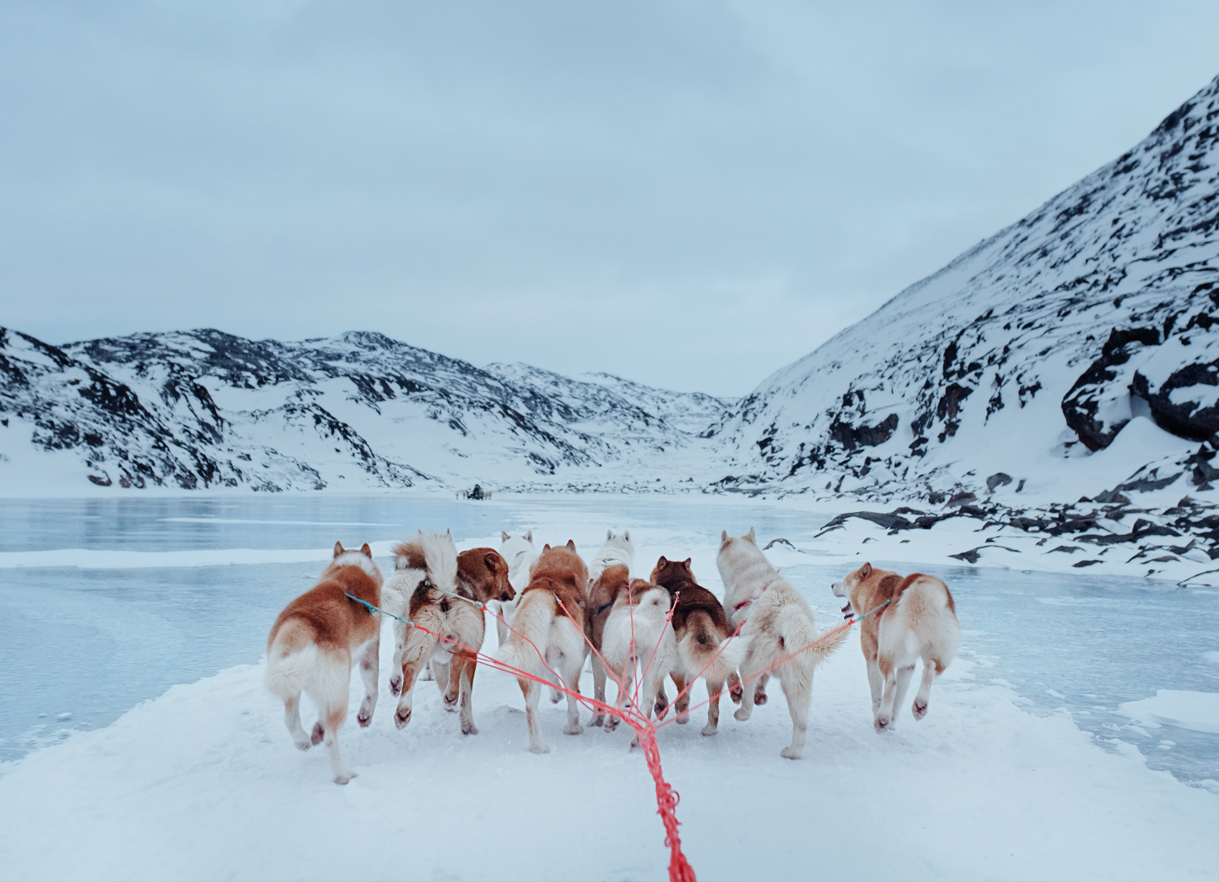 Greenland Dog Adventure came to live with a strong wish to sustain the Greenlandic dog sledding culture, which risks disappearing within the next 10 - 20 years if action is not taken now. The natural development of urbanization and a modern society where sled dogs are no longer the most important way of transportation, we have to rethink the way of life with sled dogs. Furthermore global warming is melting the sea ice, which makes it difficult for local fishermen and hunters to use their sleds and in a shorter period of time if at all. Also snowmobiles are becoming more common as a way of transporting the catch of the day back to civilisation.

We believe that Greenland Dog Adventure is a sustainable project that can keep the culture alive - a culture that dates back over thousand years to the first migration of Inuits into Greenland. The Greenland Sled Dog is a special race that has adapted to the arctic climate along with Inuits that have passed on their knowledge to the next generations. Tourism will help make this project financially sustainable so that it will still be possible to experience traditional dogsledding. A Dogsled Center will also frame a science base, where the dog will actively be studied and knowledge passed on to locals as well as visitors.

In a world pandemic we could think of no better place to spend time than in Greenland. Remoteness is the key word - in fact you can spend days and weeks in nature without meeting a single person. Sila Greenland DMC is offering bespoke travel in small groups to experience beautiful fjords with high rugged mountains, calving glaciers and wildlife like humpback whales, seals, eagles and even polar bears.

Before flying by helicopter to the East side, we will enjoy the lush, green part of South Greenland, where Norseman Erik the Red settled and named the country. The area is UNESCO world heritage with historical sites like Hvalsey Church ruin, Qassiarsuk, and Igaliku. Hot springs are not that common in Greenland and some are even too warm, but the hot spring in Uunartoq has the perfect temperature - 38 C degrees. Enjoy the view of icebergs in the fjord while soaking in a natural pool.

Apart from enjoying the nature and wildlife we will be taken good care of by a local chef that will be cooking for you based on the natural resources. South Greenland is known as “the banana coast” growing potatoes, parsnip, rhubarb and much more. The lamb is probably the best you will ever get and the Arctic Char is as fresh as they come.

Tours to this area are made possible with dedicated young entrepreneurs with a love for Greenland and especially for their region. Please let me know if you would be interested, we will set up an exclusive tour in July/ August 2021.

Back in August I got a call from a friend, who needed help with a group going to Greenland. At the end of September I escorted the group from Iceland to Ilulissat, Kangerlussuaq and Nuuk.

Little did I know at the time, but I would have the pleasant company of Dwight Schrute from The Office. Behind the funny character of Dwight is Rainn Wilson - a man with a big heart, who is genuinely concerned about climate change. The trip was initiated by Professor Gail Whiteman, who is the founder of Arctic Basecamp. For the last three years, Gail and her team of scientists have brought the Arctic to the World Economic Forum (WEF) annual meeting at Davos. They set up a real Arctic science basecamp, with an expedition tent which acts as their workplace during the day and a dormitory at night, camping in sub-zero temperatures to bring a message of global risk to the world leaders at the WEF. All scientists volunteer their time.

Besides Rainn Wilson and Gail Whiteman, we had the company of Professor David Hik, Hart Hanson, his wife Brigitte Hanson from Hollywood and Siggi Björnsson, who is a cameraman from Iceland. The purpose was to showcase the effects of climate change in the Arctic and how locals in Greenland experience this in their daily lives.

It had been a beautiful and warm summer in Greenland, but I didn't expect it to still be like that at the end of September/ beginning of October. It proved a point about climate change and we experienced first-hand how the glaciers were still melting and calving ice at Eqi Glacier north of Ilulissat and by Russel Glacier in Kangerlussuaq. I was most concerned about "Sila". The weather always has a say in Greenland and we expect the unexpected. With three destinations in only five days, I spent a lot of energy prior to the expedition prepare the group for the potential changes. But everything went according to plan.

At each destination, Sila Greenland provided local guides and set up interviews with locals. In Nuuk we met with young people, who initiated a Fridays for Future strike in front of the parliament in our capital. We had very little time in Nuuk and to spend the time wisely, we managed to set up dinner at my uncle and aunt's house. My aunt, Nauja made us fresh reindeer that my uncle, Kuto had brought home a few days earlier. For dessert we had apple puree with crow berries picked around Nuuk. My uncle was too shy to be around the prominent guests and had escaped to his boat, but we met my young cousin, who is also a fisherman like his father.

I personally enjoyed the trip very much and felt honored to meet this group of amazing and very entertaining personalities. Now we are waiting for Rainn Wilson to publish the film he has been working on with his team at SoulPancake. Gail Whiteman hosted the third Arctic Basecamp in Davos in January and we are planning for a new trip this summer for a group of 20 to demonstrate the effects of climate change. This should be of concern to us all because "What happens in the Arctic, doesn't stay in the Arctic".